Sheltering in NOLA for the storm. Landfall tomorrow. Using my grandmothers hurricane lamp 💖. #weready #hurricaneida2021 #hurricaneida #dewalt #hondagenerators #hurricanelamps
I love that man but can we not? That money could go better to take us to a SPA 😂 #bowhunting #outdoorswife #countryboy360angler #cbcgblog
She has been at training for one week and we miss her SO much (although it’s amazing how calm the house is)! @cypressarrow #canecorsopuppy #canecorsoofinstagram #canecorso #cbcgblog
This is my little family at the #McPhillipsBeach in #PacificCityOregon / #CloverdaleOregon enjoying the sun, sand, and surf. At 6 months old Zoe is almost as big as 6 year old Titan already! We spent three weeks at the #ThousandTrails RV area nearby and although it was a lovely resort we had very little (like, NONE) cell signal. BTW the resort is walking distance to the beach. It was a nice break! Other sites to see nearby are the #CapeKiwanda dunes and #HaystackRock
We had a lovely time in #PacificCityOregon #TillamookCounty and are now headed to #SeasideOregon
TBH this is akin to how I feel about making camp while backpacking. Hike all day, see beautiful views, birds, animalia, forest bathe, have a pretty glorious time and then... Now it is time to find the least dirty place to eat dinner, have you inhaled enough bugs today?, now wear the wet dirt like you like it, and feel completely helpless to keep everything clean because there is no running water. At least maybe this is strengthening your immune system. 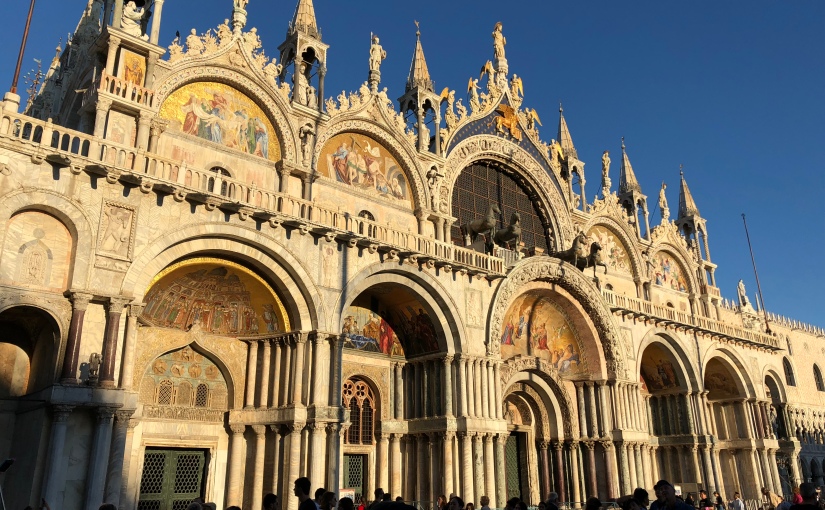 I didn’t sleep for long the night before I journeyed to Italy. I never do. The anticipation always causes me, a resolute non-morning person, to awaken long before the alarm rings with a smile on my face. Along with that anticipation, I also have a fear of being 5,000 miles from home and without having packed just the right things. Or having left something important off my pared down list of items to bring. So, inevitably the night before I begin adding “just in case” items to my luggage; An umbrella, a cute peacock blue wrap dress, a pair of dressy sandals just in case it’s warmer than I expected, an extra scarf. Maybe it’s also a fear of not having an elegant enough wardrobe to fit in with the Italians, who even bicycle in heels. 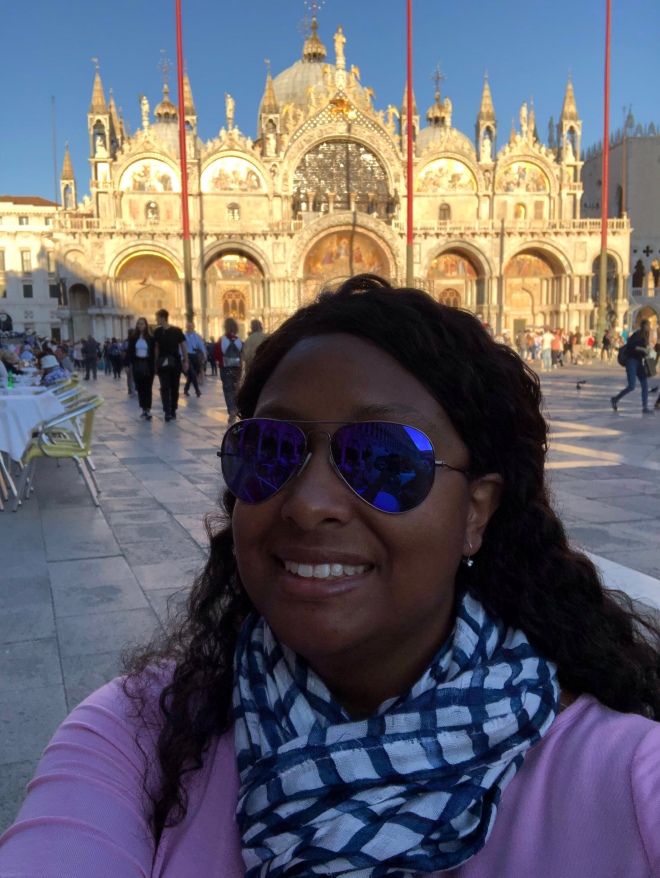 At any rate, I was also likely antsy because I love Italy. After my first trip to Verona with a friend for a month in 2006 I was so enamored with the Veneto, Tuscany, Lazio, and Lombardy that I vowed to return as often as possible. So far I have done so almost every year, expanding my horizons to the amazing Emilia-Romagna where I usually base myself and take train trips to nearby provinces. Why Italy? It reminds me of home in south Louisiana. Serious food for home cooking foodies, laissez-fare attitude about wine, and a certain focus on joie-de-vivre I didn’t expect to be so strong anywhere other than New Orleans. 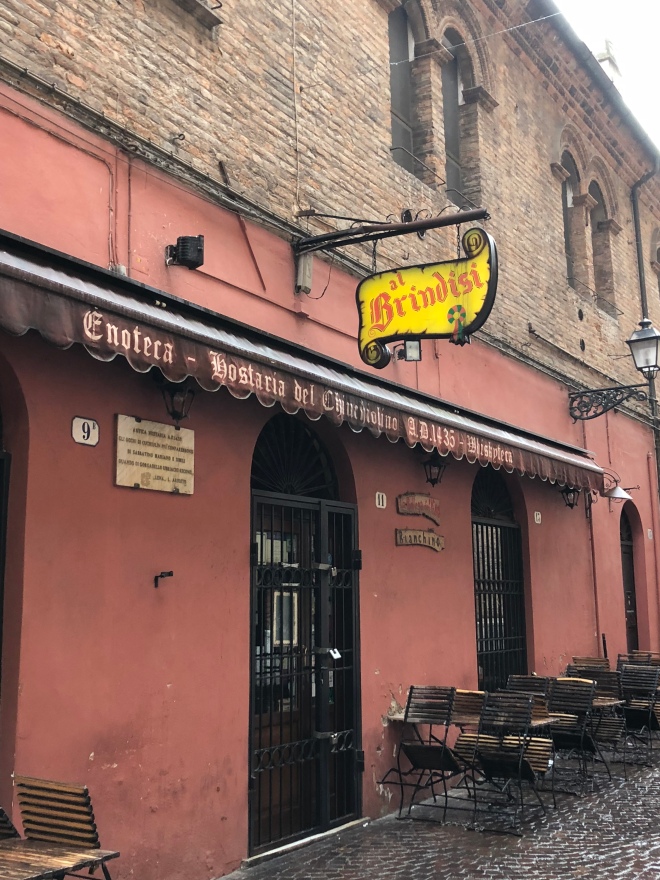 This trip, once again, satisfied my need to be on the peninsula. I racked up the miles on the train and in my rented Fiat 500 visiting Venice, Ferrara, Imola, Forli, Castrocaro Terme, Terra Del Sole, and Argenta. I had great food at new (to me) eateries in Cassana, Comacchio, and Pomposa. I learned that my favorite server for the past three years at La Postierla was expecting a baby and would not be working when I come again next September. I felt at once ecstatic for her and also like I was losing an old friend when she told me the news. She plans to name the girl Aurora. 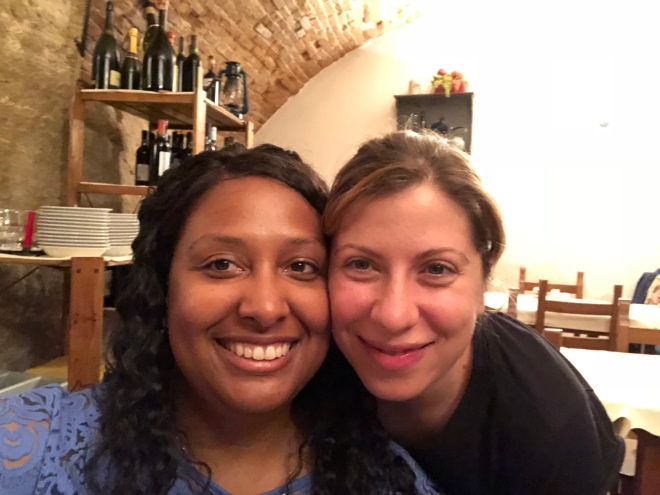 Next year will be a new adventure, and perhaps I will even make new friends. I’m on the plane now from Venice to Frankfurt to the US. I spent my last night in Venice having dinner of shrimp risotto using a kilo we bought that morning at the ancient Minuto Fish Market with old friends and a new one visiting Venice alone from Korea that we met that afternoon while having a spritz at Gran Caffe Quadri in Piazza San Marco. 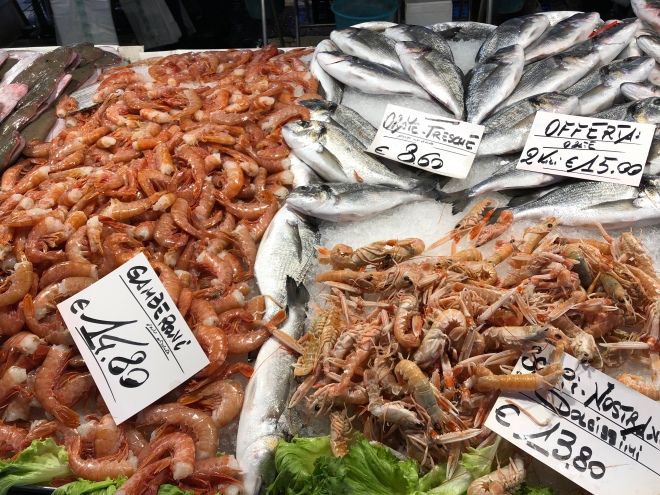 Ci vediamo, Italia. I will be back as soon as I am able. 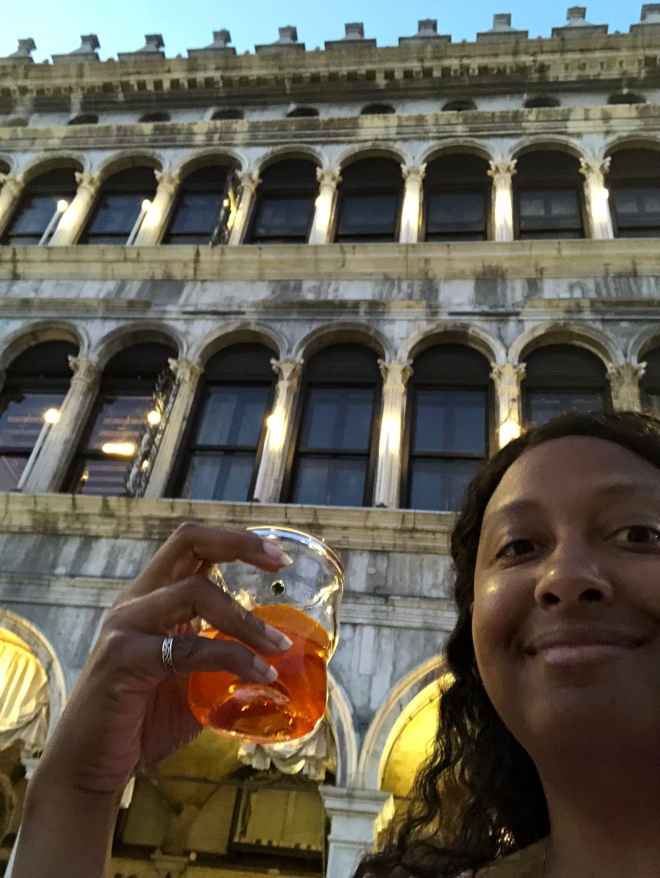